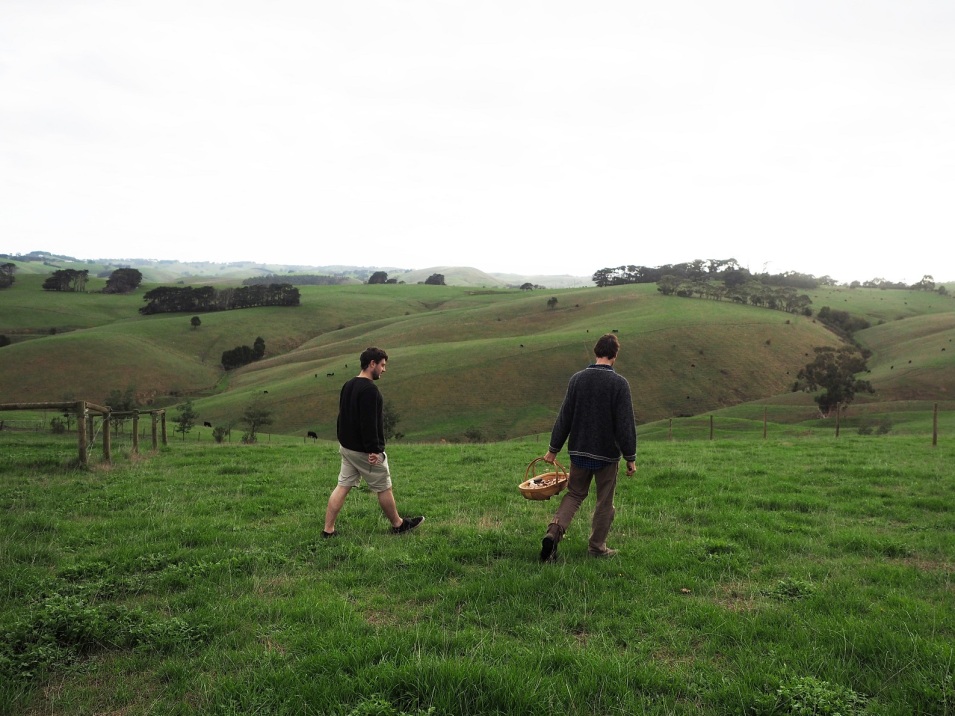 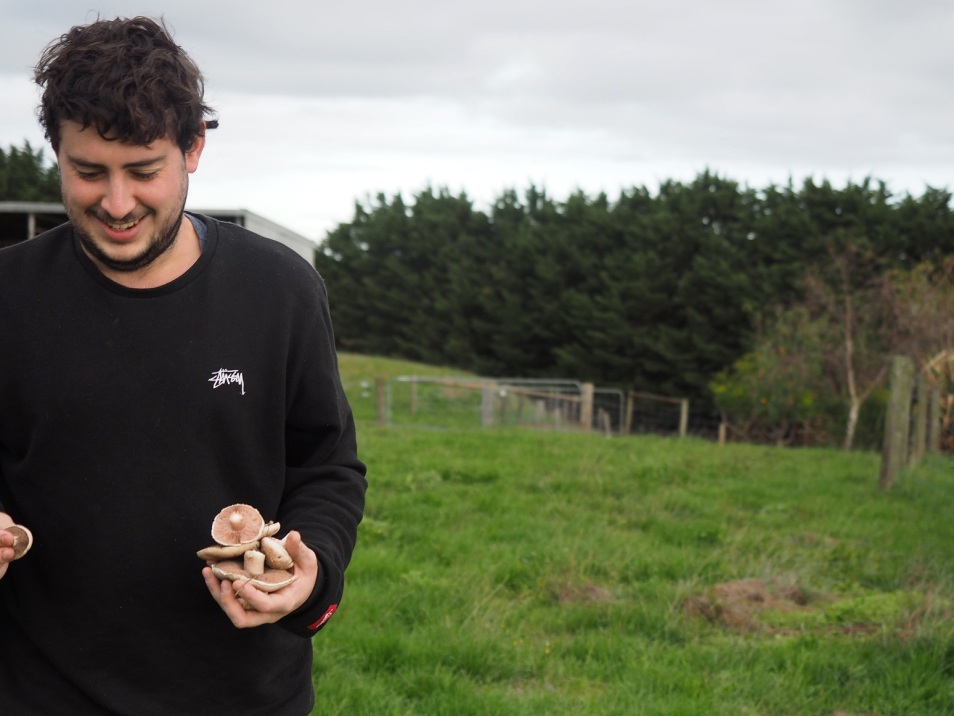 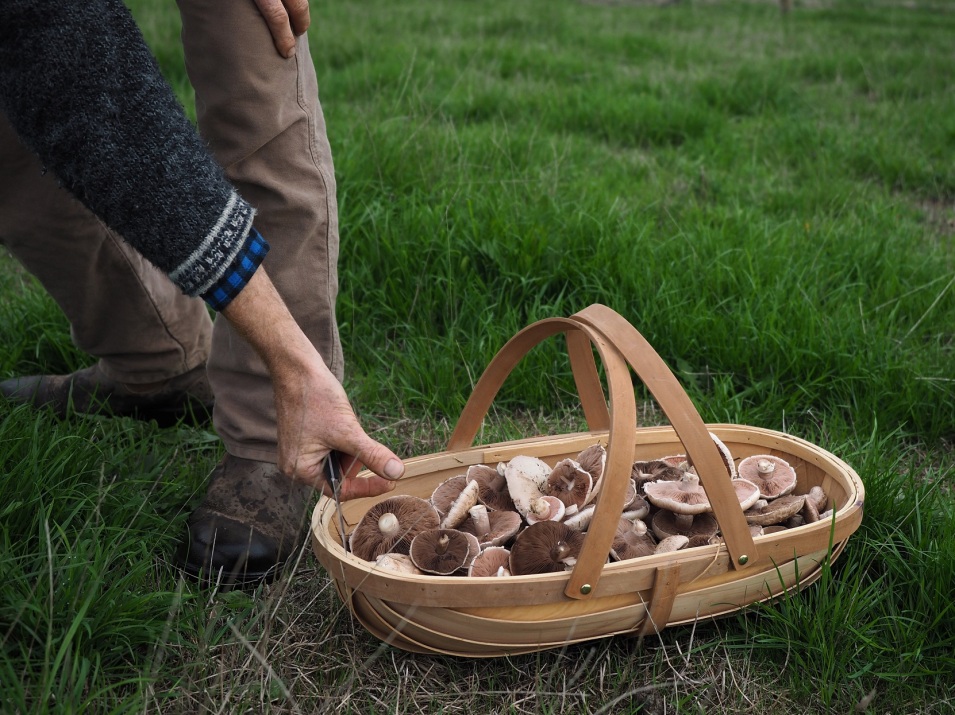 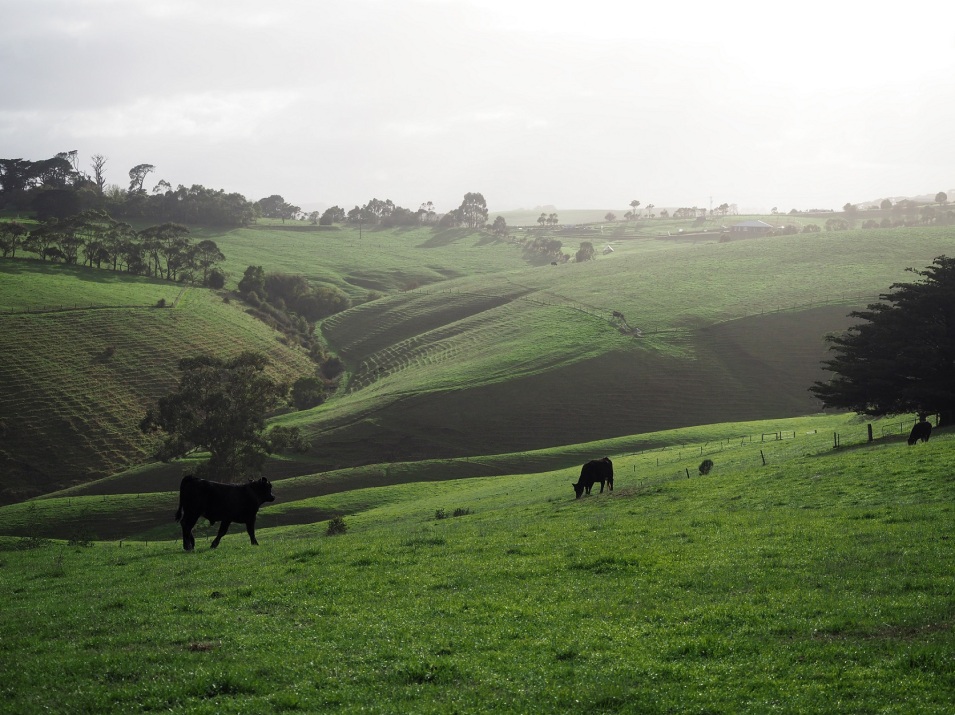 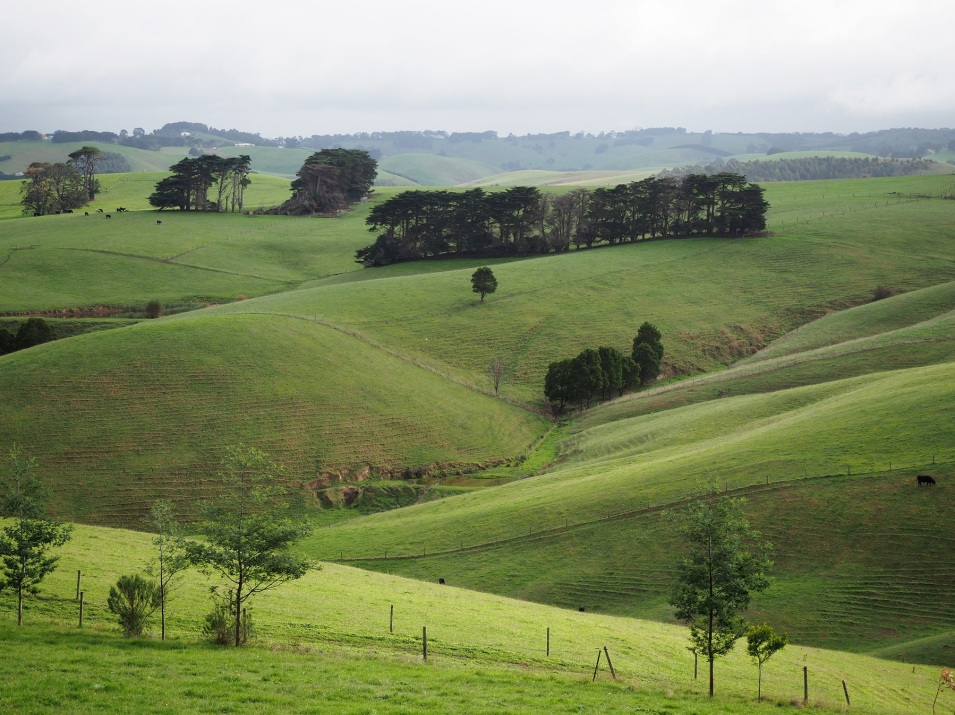 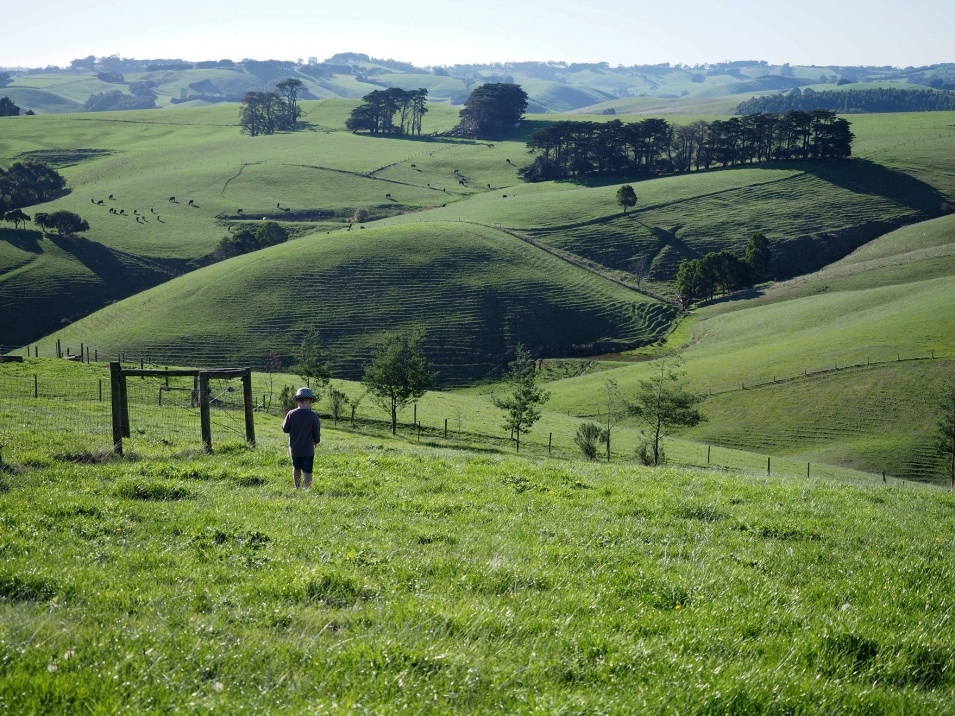 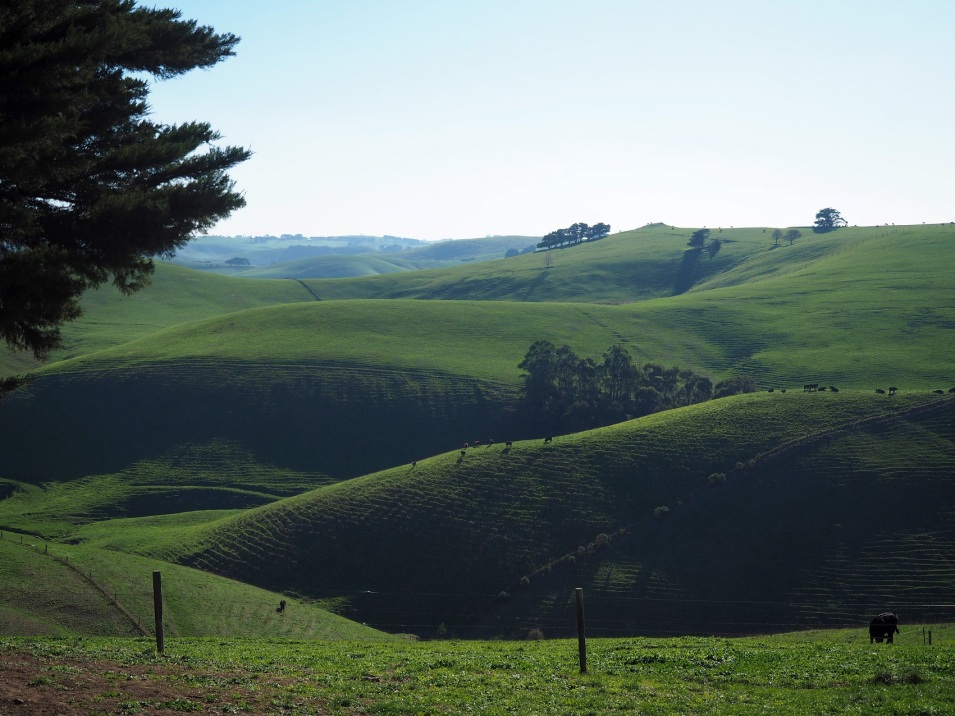 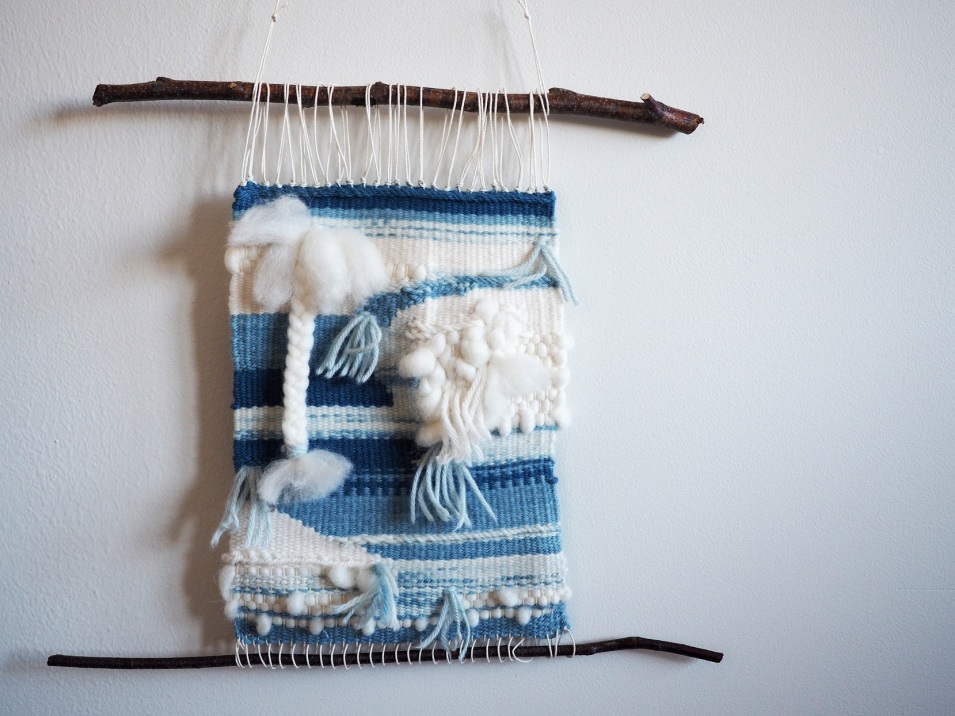 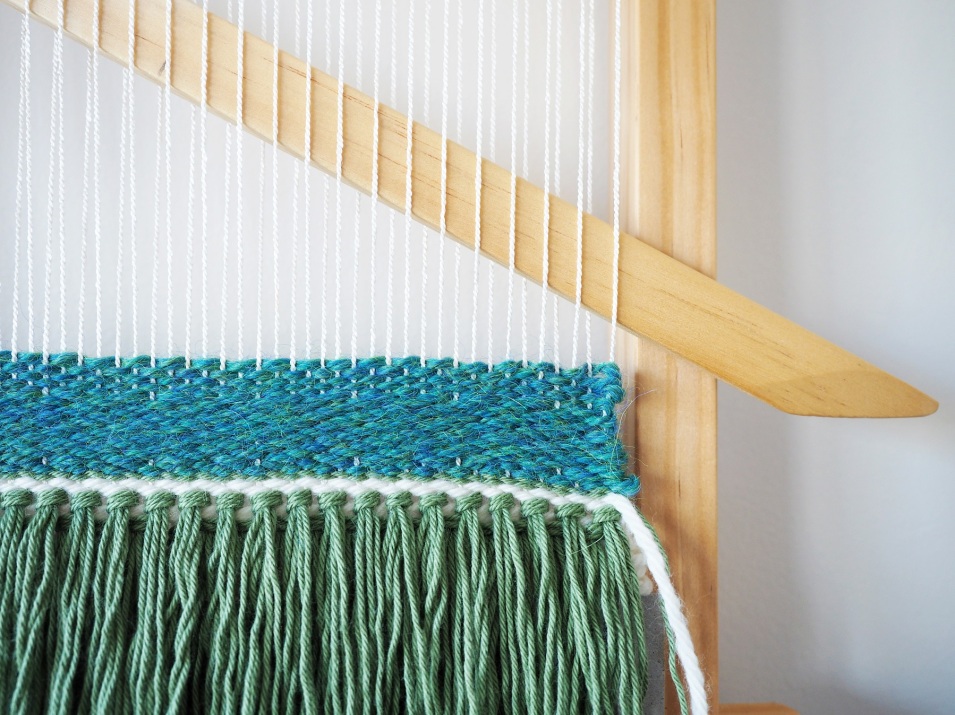 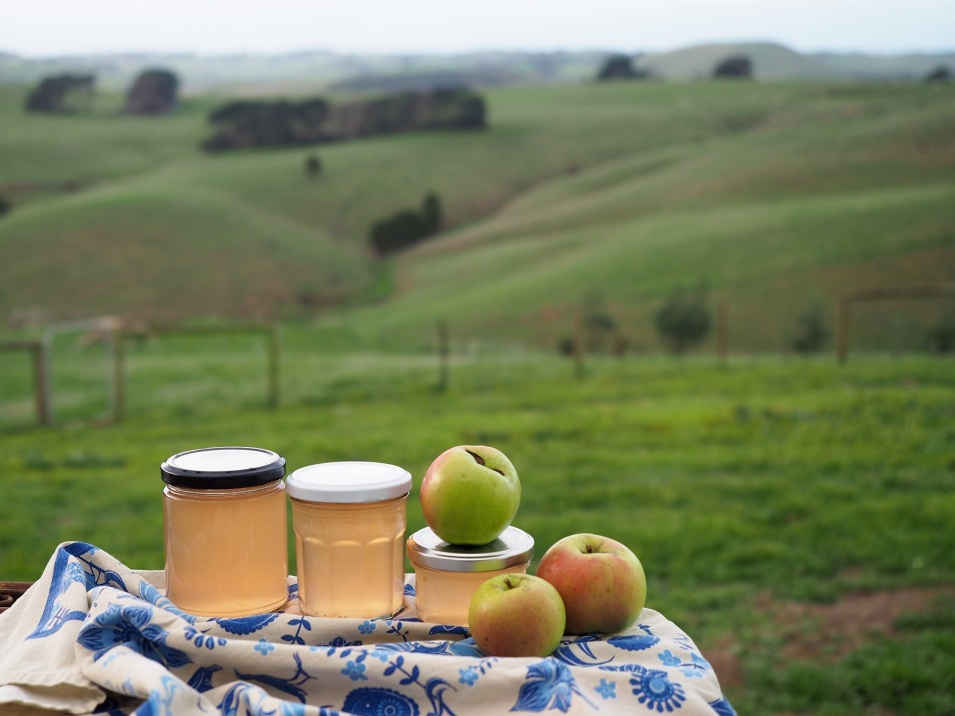 We enjoyed our first flourish of mushrooms, they inundated us for a week or so then vanished! Charlie says they’ll pop up again as it’s only early in their season. Hopefully they do as wandering around our very own paddocks (and yes I still pinch myself when I say that!) collecting a basket full of fresh field mushrooms for breakfast with my hubby and my son was one the best Sunday mornings here so far.

What beautiful days Autumn gifts us with, foggy crisp mornings and warm golden afternoons. I just can’t tell you how beautiful the hills look now, my photos really don’t do it justice. They are blanketed in a gorgeous shade of lime green as the fresh new grass grows thanks to the sun-rain-sun autumn weather. If you pick out the bright mid blue in a pack of coloured pencils, you could draw the sky, it’s been picture perfect. The morning sky has been peachy oranges and as the sun drops in the late afternoon it usually turns a soft pastel dusky pink.

The fire has been roaring through the chilly evenings and keeping us toasty warm. The weekends are full but we are making sure to squeeze in our craft/sanity time. This lovely long weekend just gone I finally took my weaving off the loom. It’s been finished and waiting for its freedom hanging, for over a year – maybe even a year and half. So slack! Of course I couldn’t string up (or warp for you weavers) the loom quick enough to have another go. I’ve had this idea floating around my head since we’ve been here, of trying to capture the vibe of our rolling green hills into a weaving. I’ll let you know how I go, could be a year or two! Some craft happens quickly, other craft takes forever.

Just like sometimes things work out perfect, yet other times there’s epic fails. I had a big fail on my first attempt at Crabapple Jelly recently. Admittedly I didn’t use crabapples so there be my first error I suppose. And I’m a bit loose on following recipes to say the least. I won’t bore you with the other stuff ups I made like not measuring how much water I used to cover the apples, therefore ending up with twice as much as liquid as I should have for the weight of apples etc etc. I did enjoy a glorious afternoon of ignorance as I photographed my pretty little jars of blush coloured jelly before I realised they were still very liquidy after many hours and not jelly like at all. They were a little cloudy despite me being super careful not to squash the pulp and allowing it to drain overnight, but I was ok with that as it was my first time making it after all. I lived in hope overnight, thinking maybe by morning they’ll be set. Um no, this soft pink apple syrup would not become jelly no matter how long I waited and how hard I wished. So, with my make lemon curd when life gives you lemons attitude, I dug out the ice-cream maker and turned my flop into a delicious sweet and tart apple sorbet. I even popped some stewed rhubarb in a batch and made an apple and rhubarb sorbet. Quite the tasty failure. Not what I had planned, but then life’s like that isn’t it?

May your kitchen flops reincarnate as something tasty too x